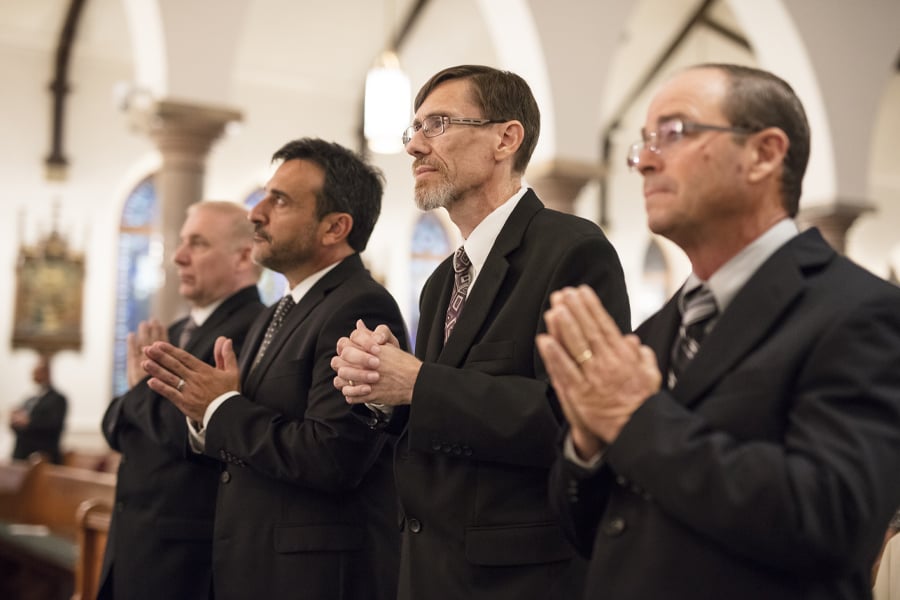 Deacon candidate David Kinch, of St. Andrew Parish in Fort Worth, along with his brother candidates, declares his desire to become an ordained permanent deacon, during the Rite of Candidacy at St. Patrick Cathedral Aug. 11. (NTC/Juan Guajardo)

During the Mass, concelebrated by Bishop Michael Olson and several priests, 15 diaconal candidates from the Class of 2020 received the Ministry of Acolyte. Another 11 underwent the Rite of Admission to Candidacy, making up the class of 2022. All 26 took major steps in their journeys toward the permanent diaconate.

“Today they make a public commitment before the Bishop and the Church to give themselves fully,” said Juan Rendon, director of diaconal formation for the Diocese of Fort Worth.

Bishop Olson, in referencing the day’s Gospel reading of Matthew 19:27-29, quipped that the Apostle Peter can always be counted on to say what everybody else is thinking —  namely, through following Christ, what’s in it for us?

“That question is something we always have with us,” Bishop Olson said. “And at the heart should be examined by every one of us who are baptized but particularly those who are called to the ordained ministry, including the diaconate.

“What do we mean by that question and do we take that question, like Peter, to Jesus? Because Peter had the courage to at least ask the right person.”

The answer, Bishop Olson said, is a return of one hundred fold to those who respond to Jesus’ call through ministry to live life on His terms and not their own.

Unlike other rituals, the Rite of Candidacy brings with it few symbols, Bishop Olson said.

“There’s no chalice, no robing, no bread and wine,” Bishop Olson said. “So what does it symbolize? It symbolizes you before Christ who is calling you and your response through His grace, which is the power and trust to live in Christ’s terms. The sign that the Lord offers us is Himself.”

Deacons play vital roles in the Church through assisting priests during Mass, serving in various ministries, and representing Christ in the world.

“Primarily they assist the bishop in any area of pastoral ministry where the bishop needs help,” Rendon said.
The Order of Deacon is a ministry of service in the Church, and the ordained men proclaim the Word of God, baptize, witness marriages, conduct funeral services, lead the faithful in prayer, and perform works of heroic charity.

“The beautiful thing about the deacons is that they are clergy but with a foot in both worlds because they also work secular jobs and are usually married,” said Deacon Don Warner, diocesan director of deacons.

They are not, Dcn. Warner joked, glorified altar boys.

“They go through an ordination ceremony and make a vow to the bishop and undergo several years of discernment and study,” Dcn. Warner said. “It’s a two-fold process. The man himself discerning and the Church discerning if this man has the gifts the Church needs at this time.”

Through five years of formation they undergo intensive scrutiny and training. The process involves stages of discernment including inquiry, aspirancy, and finally candidacy on the path to permanent formation.

One by one, Father Joseph Keating called each man forward to Bishop Olson.

“When the time comes for them to be associated with our ministry they will serve the Church in building Christian communities by preaching the word,” Fr. Keating said. “Through this formation they learn each day to live according to the Gospel to strengthen their faith, hope, and charity and grow in the spirit of prayer.”

David Bindel, a candidate in his third year of formation, called the diaconate a matter of discerning God’s calling more than one of personal choice.

“I wasn’t working in the Church field,” said Bindel, a member at Sacred Heart Parish in Wichita Falls. “Then in 2008 I was unemployed and my priest told me he thinks God is calling me to work for His Church. That was a consideration but I kept looking the other way. But it just kept snowballing until finally I began working for the Church and things started falling into place and I realized this is where God is calling me.”

Candidate Mark Gannaway, who attends St. Bartholomew Parish in Fort Worth, said the idea of becoming a deacon, when first suggested, resided completely off his radar.

“It’s a journey,” Gannaway, 59, said. “Some days you feel called. Some days I’ve wondered if this is for me. It’s a five-year process and it needs to be. You need that journey along the way from the mountaintops to the valleys. And it’s a journey that brings surprises along the way almost daily.”

“But I figured if this is God’s will then I will follow,” Gannaway added. “I did the formal application after inquiry then my wife and I went to Italy. We were in Rome at the Basilica of St. Lawrence [a deacon] when [Juan Rendon] called with formal notice, so that was a very powerful experience for both of us.”

Once the classes of 2020 and 2022 are ordained, they will bolster the ranks of the 85 current deacons in the diocese.