What comes next for the survivors of the Eastland Complex Fires? 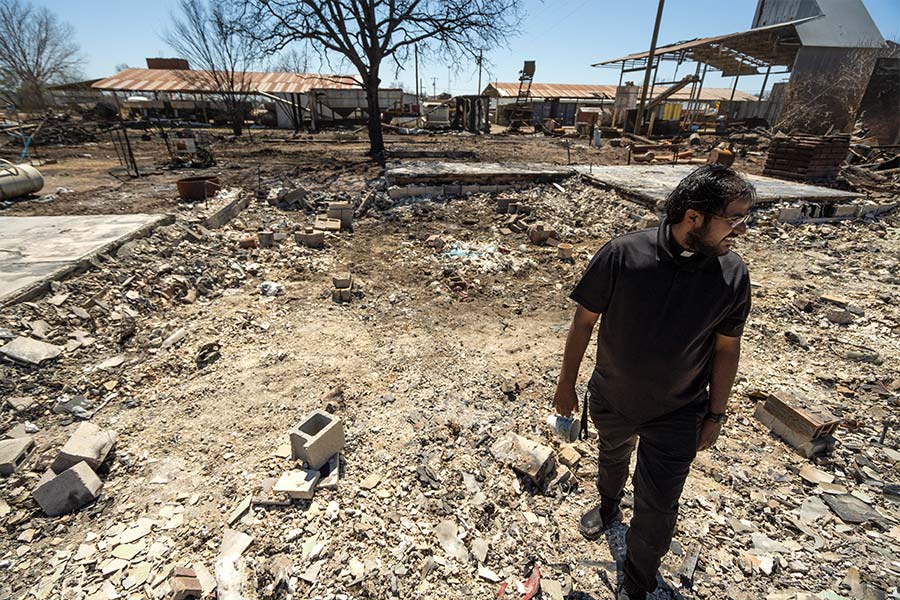 EASTLAND — On March 17, at about 5:15 p.m., Evelyn Guillen was wrapping up her workday as a student advisor at Ranger College when her mother called and told her not to return to the home in Carbon that she shared with her brother and parents.

Her mother, Maria, had arrived at the home from work at 4:30 and reclined for a quick nap. Around 5 p.m. a neighbor’s incessant honking alerted her husband, Juan, to the call to evacuate.

Maria left with only time to grab her purse, and Juan stayed behind to free their two horses from their enclosure. His next step was to open the pen of their four sheep and a calf, but firefighters prevented him and told him to flee.

That began what Evelyn Guillen remembers as “the worst 30 minutes of her life,” when she was unable to contact her father and feared that he had been caught in one of the largest wildfires ever recorded in Texas history — the Eastland Complex wildfire.

The Guillen family and six other families who belong to St. Francis Xavier Parish in Eastland lost their homes in Carbon that afternoon. Critically dry conditions and winds surpassing 35 mph generated a fast-moving fire that left many families with only minutes to escape. Others, like Evelyn, went to work that morning and received notice not to come home or were blocked by fire crews.

About 90 percent of the town’s population of roughly 350 lost their homes, and the Eastland Complex, a collective name for seven wildfires in or near Eastland County, destroyed more than 150 structures in the 54,500 acres it decimated.

Jackie Juarez, a Carbon resident of 19 years, was thankful that her daughters were on spring break and didn’t have the “traumatizing” experience of evacuating. In fact, she was en route to Dallas-Fort Worth Airport to pick up one of her daughters when she received a text from her husband, “Don’t worry about it, honey. We will make it.” With those words, “I knew my house was gone,” she said.

Father Vijaya Raju Mareedu, SAC, began calling the families who lived in Carbon that evening, checking on their welfare and making arrangements for shelter. Fortunately, the lives of his parishioners were spared, although an Eastland County sheriff’s deputy was killed as she helped others evacuate from the area.

The next morning, he went to Carbon to see the devastation firsthand, and he was able to accompany some of his parishioners, including Juarez, as they visited the scorched remains of their homes.

Juarez will always remember the sight. “Nothing left of my home, of my cats. Everything was burned, completely everything was lost. Only ashes were left on the ground,” she recalled.

Since the fires, Fr. VJ, as he is known, has provided spiritual support and coordinated assistance with housing, clothing, and food. He’s become a conduit of information about disaster relief agencies, and the parish halls of St. Rita and St. Francis Xavier are serving as places for people to donate or receive material goods, food, and water.

Donations of practical necessities began with local parishioners, and then came in from as far as Dallas, Odessa, and Abilene. Catholic Charities Fort Worth and various Knights of Columbus Councils offered assistance, according to Fr. VJ. Sympathetic ranchers from across Texas have delivered hay and feed for livestock.

On March 19, two days after the fire swept through Carbon, Bishop Michael Olson celebrated Mass at St. John Parish in nearby Strawn. The next morning, the bishop celebrated Mass at Our Lady of the Holy Rosary Parish in Cisco, St. Rita Parish in Ranger, and St. Francis Xavier Parish in Eastland. After the Eastland Mass, he prayed with the seven families whose homes burned and two young men who experienced burns in the fire.

He has called for a special collection for Eastland Wildfire Disaster Relief at Masses on April 2 and 3 “for the compassionate, long-term recovery and significant community needs arising from these tragedies." The diocese has also established a website, fwdioc.org/eastland-wildfire-disaster-relief, where donations can be made. 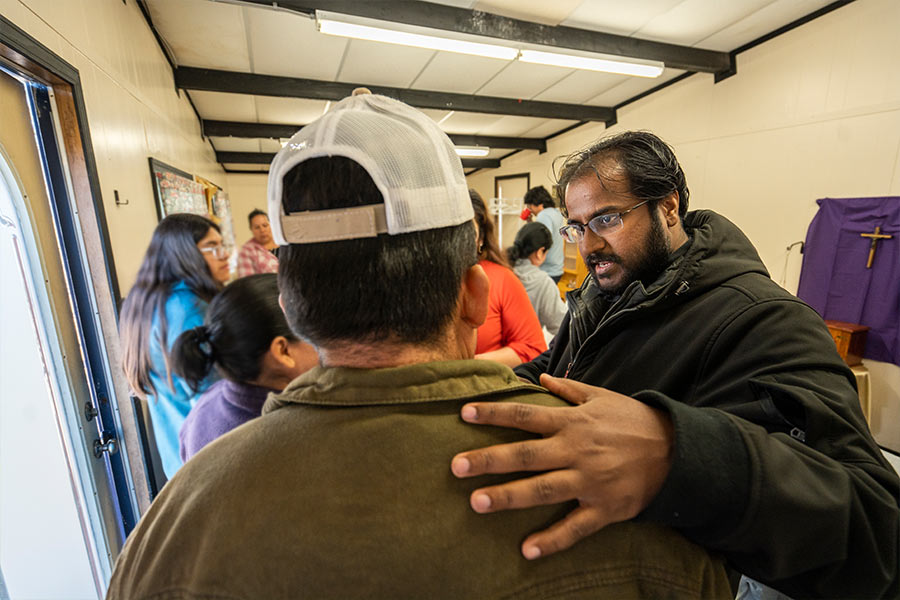 “There are no words to comfort you,” Fr. VJ has told the families in the ensuing days, “but in times of pain and difficulty, we will move forward together, trusting in Divine Providence.”

The majority of Carbon homeowners did not carry home insurance. The Guillens, like many of their neighbors, owned older, modest homes and spent years slowly renovating and expanding their homes themselves.

Just six months ago, Jaime Perales moved his wife, four children, and a granddaughter into a home in Carbon.

“I was with my cousin, renting a house for seven years. It took me one year to renovate my house [in Carbon]. We moved to the house six months ago. With God’s help first, we will [build] something again,” he said.

The Perales, Guillen, and Juarez families, along with the other four families from the parish, are a close-knit group and plan to rebuild in Carbon.

“We don’t want to go anywhere else. If we can find someone to donate materials or something, we will build homes,” said Evelyn Guillen. “We will get together; we will build one, then another one, even if it’s a small room.”

“We’re hard workers,” added Juarez. “If they bring us materials, we can build our house up. We are all together in this. We can help each other.” 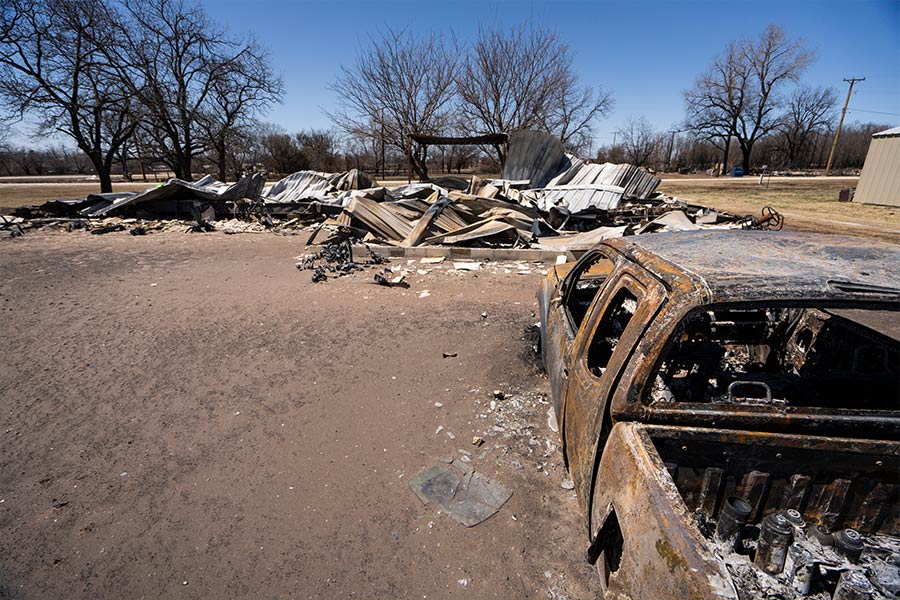 Jackie Juarez described her home in Carbon, "Only ashes were left on the ground." (NTC/Juan Guajardo)

Holding on to hope

Currently, life is on a day-by-day basis. Replacing medication and important documents that were burned. Finding clothing and shoes beyond what they were wearing on that fateful day. Sifting the remains of their homes for anything salvageable. And locating temporary shelter — the Guillens are living in a borrowed RV; the Juarez family is sharing a one-bedroom apartment; and the Perales family is living with a cousin.

Evelyn Guillen, when she is not helping other families navigate the policies and paperwork of government and charity assistance, has returned to work, as have most of the others.

The Ranger College advisor thinks returning to work is a necessary step to move forward. “If you’re at work, your mind is going to be busy. If you keep thinking about [the fire], you’re going to get depression,” she said.

Guillen’s focus is supporting her parents through the trauma, and Juarez concentrates on helping her daughters, who are 15 and 21 years old.

The survivors have found a few bright spots among the ashes — each family’s escape from the blaze, the unity of the community, the presence of the Church.

According to the families, Fr. VJ assures them they are not alone. Juarez said Father VJ “has been with us all the time. He has helped all seven families that were affected by the fire. He has been there for all of us.”

Fr. VJ encourages the survivors to “stay close to God; stay close to the Church. God will lead us through. You will see a future of hope.”

Hope arrived unexpectedly and on four legs for the Guillen family, especially Evelyn’s father, Juan. After he evacuated, a neighbor was able to release the family’s four sheep and calf from their pen.

The next day, Juan recovered his two horses — one was injured — plus the calf and three of the sheep. This being spring, the season of new birth, five baby lambs have since joined Guillen’s flock.

Hear from the survivors and Fr. VJ firsthand in this video: