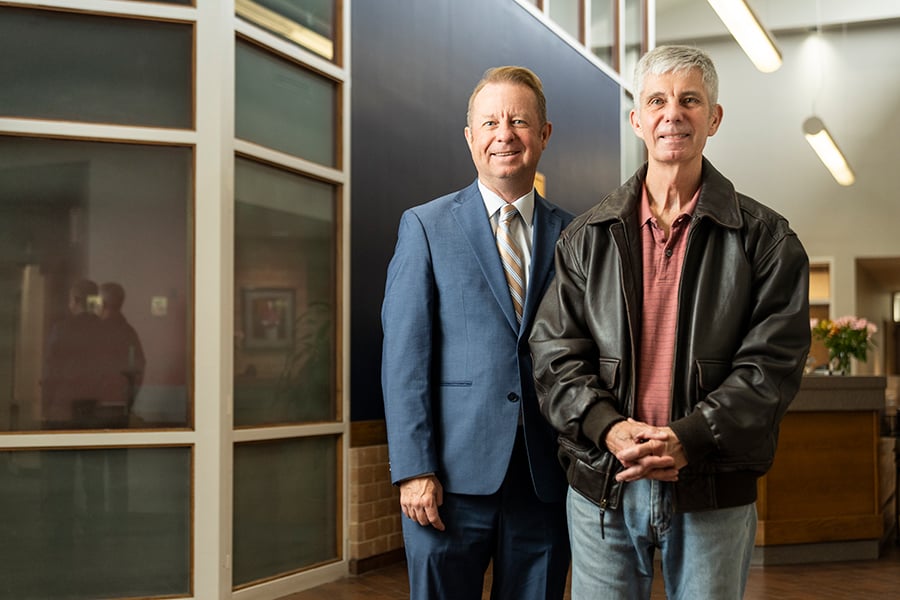 Dan Riehm would be the last person on earth to boast. He carries a flip phone, drives a 19-year-old car, and mows his own yard. He eschews any form of spotlight, praise, or adulation, and his volunteer work at a Weatherford nonprofit that serves those in need is vital but behind-the-scenes.

However, the retired Coast Guard captain is willing to talk about his gift to the Advancement Foundation because he hopes that others may learn from his experience and follow suit.

With almost 50 years of saving, investing, and living modestly, Riehm has accumulated a comfortable nest egg. About seven years ago, he began thinking in earnest about what would happen with his estate after his death, especially since he has no children.

A graduate of the Coast Guard Academy, he considered leaving his estate to the alumni association of the academy that launched his 25-year career that took him from Kodiak, Alaska, to Miami, Florida, and several ports in between.

But Riehm, who holds an M.B.A. in finance from the University of Washington, examined the alumni association’s financial statement and realized they didn’t need it.

The St. Stephen parishioner has a long history of donating to the Annual Diocesan Appeal, which supports needy parishes, schools, and ministries in the Diocese of Fort Worth.

He reflected on the legacy he would leave behind, thinking, “Where can I make a contribution somewhere more meaningful to me, to a group of people that can benefit from this gift, that need it? I looked at the annual report from the Appeal, and I saw where the money was going to support churches that did not have enough money to make ends meet, and all the other projects that they were working on, and I said, ‘This is stuff I believe in, and I can make a difference.’”

One day, while visiting his parents’ grave, he thought, “I could make a perpetual gift to the diocese” to benefit the Annual Diocesan Appeal every year.

As his decision began to coalesce, “I thought I would have to do this with a financial firm, and they would take a big cut off the top of it,” he said, but then he asked the Advancement Foundation if they were able to invest the principal of a significant gift and distribute the gains to the Annual Diocesan Appeal each year.

The answer, he learned, was “yes.”

He was pleased to learn his gift will grow tax-free, will be invested in ethical companies, and is shielded from litigation. Also, the Advancement Foundation administers the endowment, so no hefty management fees are paid to an outside financial planner.

However, the biggest benefit according to Riehm is that the balance will remain invested to provide an ongoing contribution to the Annual Diocesan Appeal. His generosity will benefit the diocese long after his lifetime.

The Advancement Foundation offers donors the option of restricting their gift for a specific purpose — such as seminarian education, an individual parish, or retired priests — but Riehm chose the Appeal because as the diocese grows and changes with the passing of the decades, the Annual Diocesan Appeal will reflect its current needs, and income from his bequest will be distributed accordingly.

Riehm calls the Advancement Foundation a “hidden gem,” because many faithful in the Diocese of Fort Worth don’t realize the services it can provide.

He feels confident that he can make a significant difference with his donation. He said, “It’s protected; it’s invested; it should last forever.”

For more information about leaving a legacy for your parish, school or a favorite ministry, please visit advancementfoundation.org.