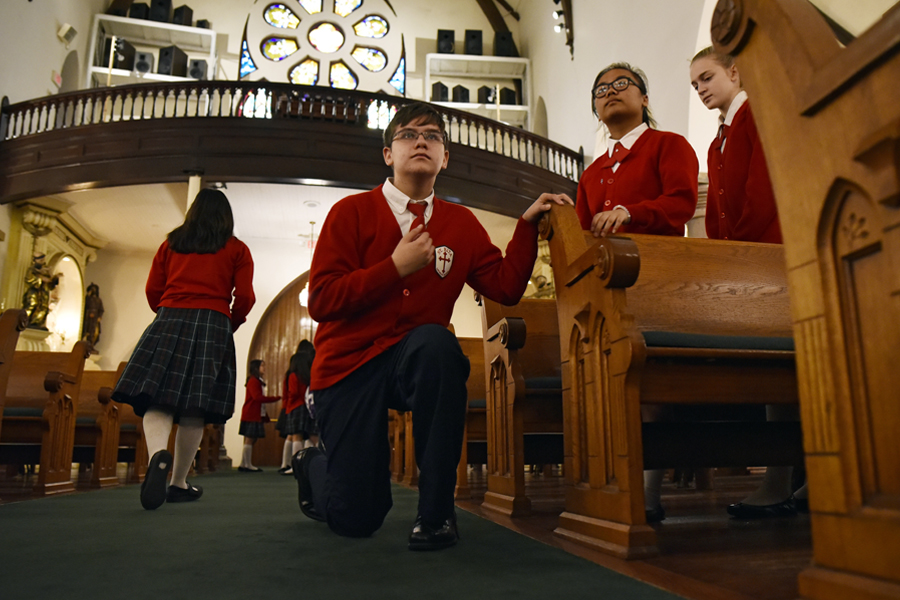 A young man from St. Rita School in Fort Worth genuflects before exiting the Eighth Grade Mass at St. Patrick Cathedral in Fort Worth, April 25, 2018. (NTC Photo/Ben Torres)

FORT WORTH — Rose Parker, an eighth-grader at Notre Dame School in Wichita Falls, is prayerfully considering the possibility of becoming a religious sister.

Rose, 14, a parishioner at Sacred Heart Church in Wichita Falls, has footsteps in her family she could follow: an aunt in a religious community and cousin who is a priest.

For Rose and nearly 400 other eighth-grade students in Catholic schools, the Diocese of Fort Worth offered them a respite from the end-of-year activities to consider their future vocation. On April 25 at St. Patrick Cathedral, Eighth Grade Vocation Day integrated the annual eighth grade end-of-year Mass with vocation guidance.

Students from across the diocese spent a six-hour day together that included lunch and culminated in a closing reflection and Mass led by Bishop Michael Olson.

Combining Vocation Day and the Mass was a new approach this year, according to Jennifer Pelletier, diocesan superintendent of Catholic schools.

The Wednesday assembly continued the tradition of the eighth-grade Mass, with eighth-graders from Catholic schools across the diocese.

It was melded with break-out sessions for students to consider religious vocations.

She said the diocese wanted to cement the idea that although the students were graduating eighth grade, “you don’t have to graduate from your faith.”

The diocese is putting a greater emphasis than ever on vocations, with priests, religious women, collegiate seminarians, and theology students speaking over the school year to students from their early years to high school. 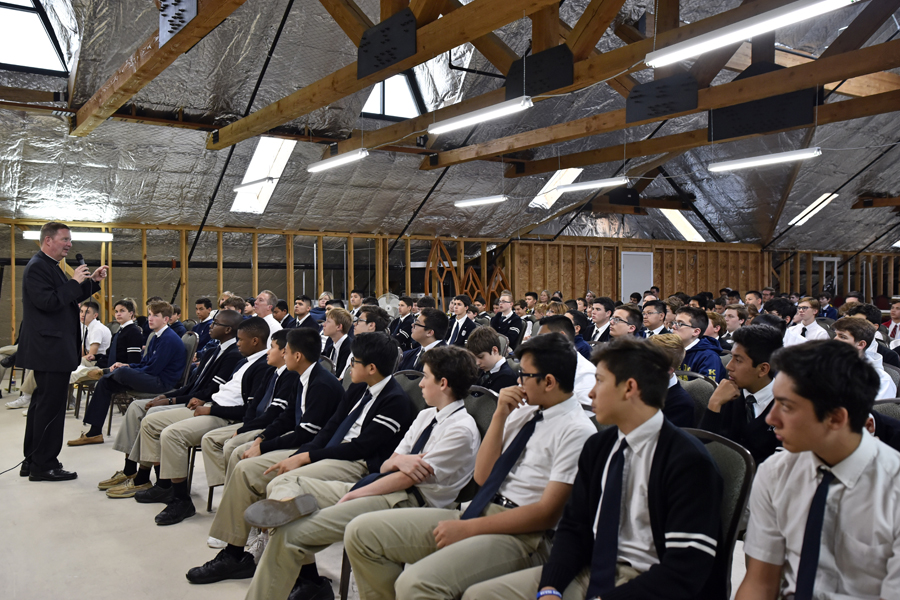 Fr. Flynn offered advice for a man considering his vocation.

“Every Catholic male should take his discernment seriously, and this should include being open to a calling to the priesthood,” he said. “It is only through prayer and consultation with others that a young man can truly know what God desires for his life.

“Please be open to God’s will in your life, no matter what path that may take, and if you feel God is calling you to be a priest, then please contact your pastor and the diocesan vocations office to help you further uncover God’s will for your life.”

Caleb Jech, 13, from Notre Dame School, was moved by the vignette of the priest who began praying the Rosary after receiving guidance from a religious sister and “God called him to be a priest.”

“Maybe others here today might start praying the Rosary to see if they are called,” said the teenager, a parishioner at Sacred Heart. “His story might get people thinking if they should become a priest.”

His twin, Connor Jech, who plans to become a lawyer, was interested in how priests spend their leisure time.

“They play board games and watch sports,” he said he learned.

The girls’ questions also ran the gamut from faith to grooming.

“How do you do your hair?” Emma Gazdik, 14, a student at Notre Dame and a parishioner at Our Lady Queen of Peace Church in Wichita Falls, asked Sister Nguyen in a break-out session.

The long response from the sister about her coiffure satisfied the curiosity of the teenager, who plans to be a dermatologist or plastic surgeon.

Father Matthew Tatyrek, a vocations liaison and chaplain at Nolan Catholic High School, was excited about the day.

After all, when he attended World Youth Day in Cologne, Germany in 2005, he had no idea a cardinal’s question would be the catalyst toward becoming a priest for the Diocese of Fort Worth.

He had been considering a career as a Judge Advocate General’s Corps lawyer, but the then-sophomore at Angelo State University made a life-altering decision when he traveled to Cologne.

The Vernon native was accompanied by the youth ministry from his parish — Holy Family of Nazareth — and saw Pope Benedict XVI, who had recently become pontiff and head of the world’s Catholics.

A watershed moment was when Cardinal Theodore McCarrick, then archbishop of Washington, D.C., pointed to all the priests concelebrating the Mass with him and challenged the crowd, saying, “How many of you are going to be sitting with them?’” Fr. Tatyrek said.

“I remember being struck by the strength of his words and the challenge,” the priest said. “It stayed with me.”

Fr. Tatyrek began seriously discerning a call to the priesthood or some ordained service in the Church. After receiving a degree from Texas Tech in 2009, he completed two years of seminary in the U.S. before being sent to the Pontifical North American College in Rome, where he completed his years of formation.

The chaplain, who was ordained on May 21, 2016, said at Vocation Day that “the goal of the day is to introduce the idea of boys being a diocesan priest or girls a religious and expose them to life in a certain regard.”

Recalling his trip to Germany that changed his life, Fr. Tatyrek said, “Just as I had taken the words to heart that were expressed that day in Cologne, I hope they will be praying for guidance in seeking where the Lord wants them to be.”

After the break-out sessions, the students attended Mass celebrated by Bishop Olson. In his homily he spoke about the day being important, a day “we ask God’s blessing as you make a transition as we meander into our high school years.”

He asked the students, some from each campus who carried in their school banners during the processional, to get into “the habit of paying attention to the Lord in prayer – to talk with God.”

He added, “He loves you unconditionally.”

The bishop hoped that for some there could be a calling to the priesthood or religious life.

“Those are callings in which the Lord Jesus asks you to give one’s life as He gave it for the sake of all,” Bishop Olson said.