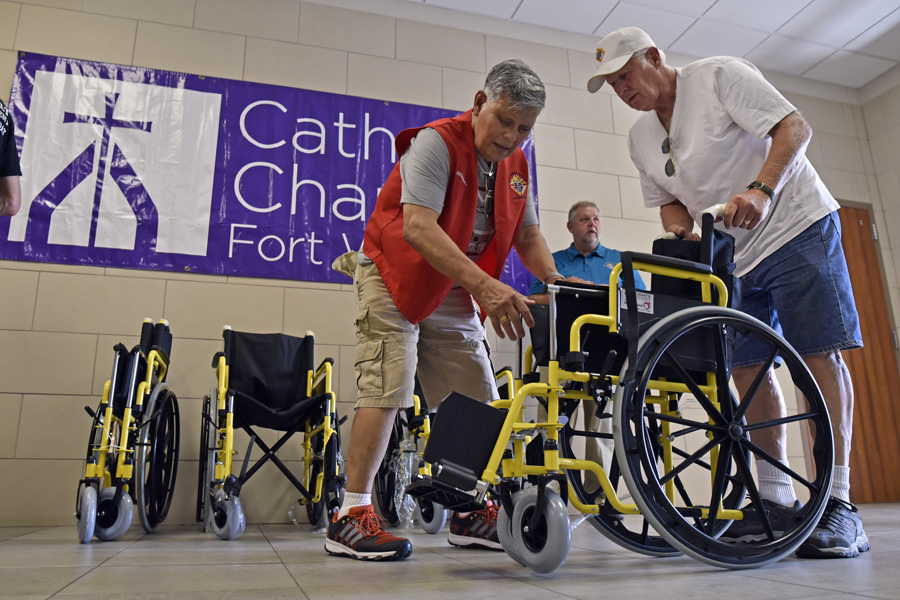 FORT WORTH — The recipient of two Purple Hearts and a Silver Star, George Webster, a Knight of Columbus, was volunteering at the Fort Worth VA Outpatient Clinic when he learned wheelchairs were in short supply.

The wheels started turning in his head.

It took the 78-year-old retired Army sergeant major only a second to put the three together.

Additional wheelchairs were provided to Vietnamese Martyrs Parish in Arlington and Honor Flight Network, a non-profit organization that transports veterans to Washington, D.C., to visit and reflect at their memorials.

“It’s a blessing from God to see the need and the help you just give,” said Webster, a member of St. Rita Parish in Fort Worth and a Grand Knight from 2007-2009. “Anything I can do for the blessing of God, I’m going to do it. Everything about me is give it back.”

Chris Stark, general agent of the Fort Worth Knights of Columbus, said Webster is the epitome of the Knights’ mission of charity.

“George is the real superstar, the fire behind us getting the success we’ve had,” said Stark, a member of St. John the Apostle Parish in North Richland Hills. “Most dioceses don’t get that many wheelchairs in their local programs. It’s a real accomplishment.”

Webster is proud to be one of the catalysts for the burgeoning charity.

“God kept me here for a reason,” said the head of the Knights’ wheelchair program as he led the distribution June 22 at the veterans’ institution. 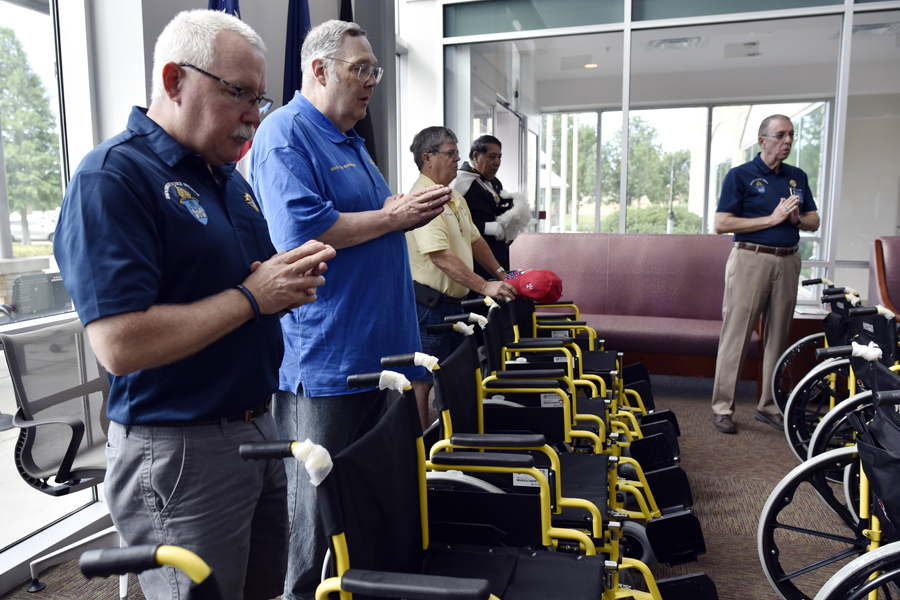 Knights Pat Henz, left, and Mark von Rosenberg hold their hands together in prayer as a presentation is made donating wheelchairs to the Veteran Affairs Hospital in Fort Worth, June 22, 2018. (NTC photo/Ben Torres)

The Knights delivered 20 wheelchairs there – most earmarked for veterans who included a man given his immediately. Although he did not speak English, his look of appreciation spoke louder than words.

“This donation will help countless patient families navigate Cook Children’s large medical center with ease,” Mitchell said. “Whether making a trip to the food court or a visit down the hall, these wheelchairs will help our patients get out of their rooms even if they’re not well enough to walk. They will also help family members who may need mobility assistance.”

And at Catholic Charities, Knights were moved by an emotional homeless man who received a wheelchair to replace one that was falling apart.

Willie Rankin, the parish partnership manager at Catholic Charities, expressed her appreciation, saying, “The wheelchairs they donated to our agency enabled us to immediately distribute them to clients who are the most vulnerable in our community,” including veterans, the homeless, and those without medical insurance.

In total, the Knights bought a carton of 150 wheelchairs for $16,000. The price per wheelchair is greatly reduced thanks to the Global Wheelchair Mission.

The American Wheelchair Mission is the brainchild of Chris Lewis, son of entertainer Jerry Lewis. A Fourth Degree Knight, Lewis helped create and sustain the non-profit humanitarian mission that has provided thousands of new, free wheelchairs to physically disabled children, teens, and adults who are without mobility and the means to acquire a wheelchair.

The wheelchairs delivered to Fort Worth featured a signature yellow color and boasted the Knights’ logo.

There are 100 million people in the world who need a wheelchair but cannot afford one, according to the organization’s statistics.

For every donation of $150 received by the Global Wheelchair Mission, it can deliver a new wheelchair that could cost more than $500 in a medical supply store.

“Our donation of wheelchairs brings the gift of hope, dignity, freedom, and independence to those who don’t have it,” said Pat Henz, a member of St. Jude Parish in Mansfield. “It’s just a neat little thing to do to bring mobility to someone in need.”

Added Henz, 53, a detective in the major case unit of the Fort Worth Police Department. “We’re well on our way to raising money for another container.”

More than 108,000 Catholic men and their families are members of the Knights of Columbus in Texas. Recently, the number for the 28-county Diocese of Fort Worth surpassed the 10,000 mark.

The Knights of Columbus Western Metroplex Chapter is comprised of 57 Knights councils in the Diocese of Fort Worth, according to Bruce Mallory, Fort Worth diocesan deputy.

“The Fort Worth Diocese [Knights] will grow by over 500 Knights this year and are shooting for 1,000 next year,” said Mallory, a member of St. Thomas the Apostle Parish.

Douglas E. Oldmixon, Texas State Deputy for the Knights of Columbus, said Texas has always been a major supporter of the Knights and their charities.

For the fourth consecutive year, Texas has topped the field for volunteer hours and charitable donations among all the areas where the Knights of Columbus are active.

In 2017, members in Texas volunteered nearly five million hours in service to their parishes and communities and donated nearly $10 million to charity.

From all across the organization, nearly two million members in 17 nations volunteered more than 75 million hours and donated more than $185 million to charitable causes, setting record highs in 2017.

“The Knights and their families in Texas thrive and grow by making opportunities for more families to share in the great charitable works we are committed to, including support to people with mobility challenges and other special needs, prolife pregnancy resource centers, Special Olympics, chaplains for military and veterans, faithful citizenship programs, and other ministries designated by the Catholic bishops of Texas,” the state deputy said.