Mary McLarry, first diocesan Director of the Office of Worship, dies at 85 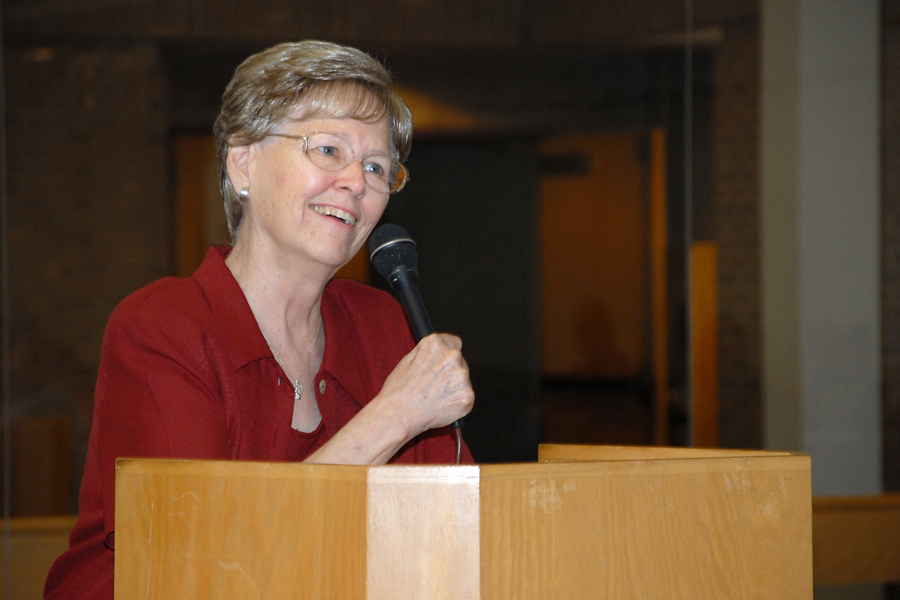 Mary Fauncein McLarry is seen at her 2007 retirement from the Office of Worship. (NTC file photo/Kathy Hamer)

Mary Fauncein McLarry, 85, the first Director of the Office of Worship in the Fort Worth Diocese, died June 21. The Sisters of St. Mary of Namur (SSMN) led a vigil service July 1 at Thompson’s Harveson & Cole Funeral Home in Fort Worth.

Father Kyle Walterscheid, pastor of St. John Paul II University Parish in Denton, will celebrate a Mass of Christian Burial for McLarry at 10 a.m. July 3 at St. Peter the Apostle Parish in Fort Worth.

Interment will be at a later date in the Riverside Cemetery, Wichita Falls, Texas.

McLarry was born Sept. 13, 1932 in Wichita Falls to Jess and Alice McLarry.   Though her family was Baptist, McLarry discovered the Catholic faith at age 12 when, after her mother’s death, she was sent to Our Lady of Victory (OLV) boarding school in Fort Worth.

In the spring of 1950, she was received into the Catholic Church at Immaculate Conception Parish in Denton. On Sept. 1 of the same year, she entered religious life with the SSMNs who had been her teachers at OLV.

McLarry earned a bachelor’s degree in music with a concentration in piano from the American Conservatory of Music in Chicago in 1960. In 1969, she earned a master’s in liturgy from the University of Notre Dame. She did graduate work during the summers, and during the school year taught religion, piano lessons, and directed choirs at Nolan Catholic High School.

In 1970, McLarry became Music and Liturgy Director at St. Peter, where she worked until 1986, when then Bishop Joseph Delaney appointed her Director of the Office of Worship. In that position, she helped parishes develop inclusive, multicultural liturgies and collaborated with diocesan committees to develop sacramental guidelines, including liturgical changes that came out of the Second Vatican Council.

“Unless you lived in that time — the time of the Second Vatican Council — there’s no way to begin to understand what it was like,” McLarry said in a 2007 interview with the NTC. “It was a time of so many changes in the Church, and it was exciting to be a part of that, and to be serving in ministry with the sisters, because they were and are so forward-looking, so aware of the needs of the people.”

“She was welcoming to everyone and encouraged people who didn’t think they could sing or play an instrument,” Elsken said. “We all wanted to do our best for her.”

McLarry also created LitNet, a “liturgy network” of people involved in parish liturgy or music. Joanne Werner, Director of Music and Liturgy at St. Michael Parish in Bedford, explained that under McLarry’s guidance, this group of professionals and non-professionals worked collaboratively and creatively, despite their varied levels of knowledge and experience.

“It was a really rich experience,” Werner remembered.  “It was liturgical formation for those of us who were learning as we went along and her teaching style was gentle, pastoral, and very open. We all felt very supported.”

McLarry’s gentle spirit and collaborative nature reached beyond liturgy and worship to the permanent deacon formation program where she was often seen supporting deacon candidates and their wives on formation weekends.

Though she decided, after much discernment, to leave religious life in 1985, she stayed in contact with the SSMN sisters and continued working in the Office of Worship until her retirement in 2007.

McLarry is survived by her niece, Jenepher Woods, and husband Brian.  In lieu of flowers, donations may be sent to SSMNs, ssmnwestern.com/donate