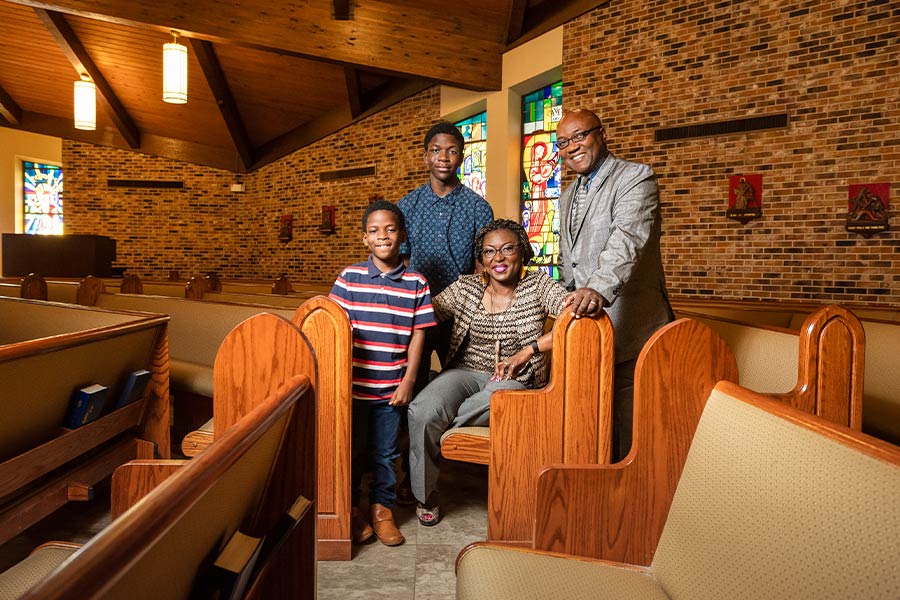 They are: Jane-Mary and Jean-Patrice Tchatat, with their children Zane (left) and Frederick at St. Bartholomew Parish in Fort Worth. Daughter Maya is not pictured. (NTC/Ben Torres)

With family and business ties on three continents, Jane-Mary and Jean-Patrice Tchatat began their marriage separated by 4,950 miles and seven time zones.

In time, Jean-Patrice decided to take a step back from his career to move to Fort Worth.

Pope Francis described actions like this in his apostolic exhortation Amoris Laetitia (The Joy of Love), which was issued five years ago.

“As love matures, it also learns to ‘negotiate.’ Far from anything selfish or calculating, such negotiation is an exercise of mutual love, an interplay of give and take, for the good of the family,” wrote the Holy Father.

Pope Francis has announced an “Amoris Laetitia Family” year to affirm the complexity and realities of family life and to share spiritual insights and practical wisdom. He said, “We are called to accompany, listen, and bless the journey of families.”

For this “Amoris Laetitia Family” year, the NTC is expanding its regular feature The Domestic Church to explore how local families live daily struggles and joys.

THE BEGINNING — Jane-Mary originates from northwest Cameroon, where English is the primary language, and Jean-Patrice is from west Cameroon and grew up speaking French.

After graduating from high school in London, Jane-Mary moved to Fort Worth, where an uncle was living, to continue her education. She eventually went to pharmacy school in Oklahoma, then returned to work in Fort Worth.

Jean-Patrice finished his education in Paris and worked in information technology for the banking industry in Paris and London.

A childhood friend of his introduced them when he was visiting Fort Worth on business.

EARLY MARRIAGE — They married in 2007 but continued to live an ocean apart. They would talk each day in the morning and evening, and they were able to travel to visit each other about six times a year.

The distance seemed even greater after the birth of their oldest son, Frederick. Jean-Patrice remembers their son crying at the airport when he would leave, and he worried about his wife being alone without any help.

One day at lunch, Jean-Patrice stepped away from his workplace in Paris to buy clothes for Frederick. When a co-worker learned what he was doing, he told Jean-Patrice, “What are you doing here?” Jean-Patrice explained, “I’m not American, I’m French. It’s difficult to go there.”

His co-worker responded, “No, that’s not the reason. You need to go stay with your son. You cannot have your family living in another place.”

The truth stung. Shortly thereafter, he moved to Fort Worth and was a stay-at-home dad for a year. He has since resumed his work in IT.

PARTICIPATE, DON'T SPECTATE — Jane-Mary is a lector, sacristan, and Eucharistic minister, and she has also served on the RCIA team; Maya is an usher; and Frederick is an altar server.

“I want to give more to our community and church,” said Jane-Mary. Her devotion to the Blessed Sacrament motivates her to participate as a sacristan and an Extraordinary Minister of Holy Communion. “I like to set up the altar so I can be closer to Him,” she said.

When Mass was celebrated without a congregation in April 2020, “I couldn’t stand it,” Jane-Mary recalled. After two weeks of watching livestream from home, she thought, “I can’t take this anymore,” drove to the church and knocked on the door to see if “maybe I could be the tenth person.” To her delight, they had enough capacity to allow her inside. She continued the practice until Mass resumed in person.

MASS APPEAL — Jane-Mary said attending Mass is “part and parcel of who I am. Wherever I am on Sunday, I have to go to church.”

They hope to impart that love to their children, that they “always go to Mass no matter what, not because their parents take them.”

SCHOOLED IN THE FAITH — Frederick and Zane go to Catholic schools, and their parents reinforce those values at home with prayer and service. As a family, they deliver food and items to homeless shelters. “We want to encourage them to see people, to remember people who are in need,” said Jane-Mary.

A GREAT START — Jane-Mary said the family likes to start the day with prayers of thanksgiving, followed by prayers of blessing for their friends and family. “Then we thank Him for listening,” she said, explaining that beginning the day this way helps promote gratitude for what God has done for them.

ROOTED — Jane-Mary is part of a local organization of Catholic women from Africa that prays together and studies Catholic teachings. “We build each other up; we pray the Rosary together every week,” she said.

STRONG FAITH, STRONG FAMILY — Jean-Patrice credits his faith with strengthening his marriage and his family. It helps him align his values with what is truly good, and it prevents him from being corrupted by the values of the world.
He said, “It helps you to see what is prohibited, what is not good for society. It gives integrity for the family.”

He joked that without his Catholic faith, he might be obsessed by “putting the George Washingtons in my pocket,” referring to the importance that society places on accumulating wealth.

“Faith brings together my family and my community,” he said.

SOURCE OF HOPE — Jane-Mary said faith gave her the strength to get through hard times, like the early years of their marriage when they lived apart, and when Zane was delivered early because of health concerns. “At those times, He had me in His hands.”

“Faith gives me hope for a better tomorrow every day. I take one day at a time. It’s a blessing,” she said.”