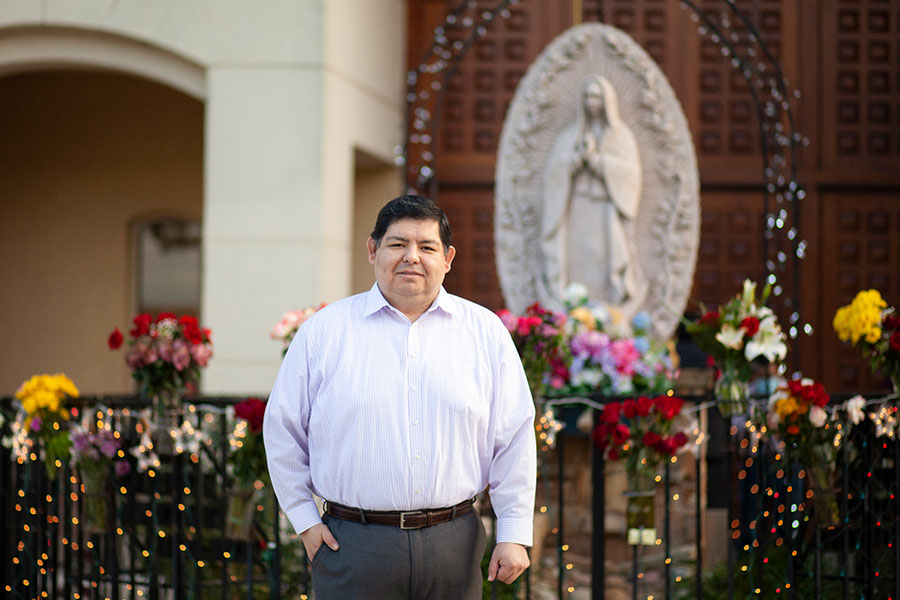 Alberto Rios, one of two instructors in the diocese equipped to train Safe Environment facilitators in Spanish stands outside Immaculate Heart of Mary Parish in Fort Worth. (NTC/Jayme Donahue)

FORT WORTH — In November, five people in the Catholic Diocese of Fort Worth trained to become facilitators in the diocese’s Virtus program to prevent child sexual abuse, Protecting God’s Children.

That training is something that has happened frequently since the diocese began using the Virtus program a little more than two years ago. But this time the instruction for the facilitators was given in Spanish.

Facilitators have been leading the program for clergy, employees, and volunteers in Spanish since it began, but they had to learn the materials in English first.

“So many nuances get missed as facilitators have to translate them into their own language,” said Sandra Schrader-Farry, director of Safe Environment.

Alberto Rios, one of two instructors in the diocese equipped to teach facilitators in Spanish, said, “There’s a lot that is lost in translation whenever we go from one language to another. It’s also helpful to have a background in the culture.”

Sometimes a literal translation doesn’t work as well as a program designed in Spanish, he said.

The end result is that more people can facilitate the sessions to reach more participants across the diocese, which makes children safer as parishioners’ eyes and ears are opened to signs of potential abuse, Schrader-Farry said.

Reaching more people during the pandemic was also the goal of offering Protecting God’s Children and other Safe Environment programs in Zoom sessions.

Nancy Mitchell, assistant director of Safe Environment, said that about 4,000 people in the diocese have attended sessions on Zoom since March.

Susan Schabel, liturgy coordinator at St. Philip the Apostle in Lewisville, has facilitated sessions on Zoom several times a month. She was surprised at how well the online sessions went.

“People are a little more talkative in their homes, and it’s neat meeting people from all over the diocese,” Schabel said.

Her Zoom sessions max out at 28 people.

“Beyond that, it gets to be too many to participate,” she said.

Schabel wanted to facilitate the virtual sessions because it was a way she could serve from her home, and she’s conducted both Protecting God’s Children and the refresher course.

Schrader-Farry said, “People continue to want to be trained. A lot of volunteer opportunities are on hold, but they want to be ready. I find that encouraging.” 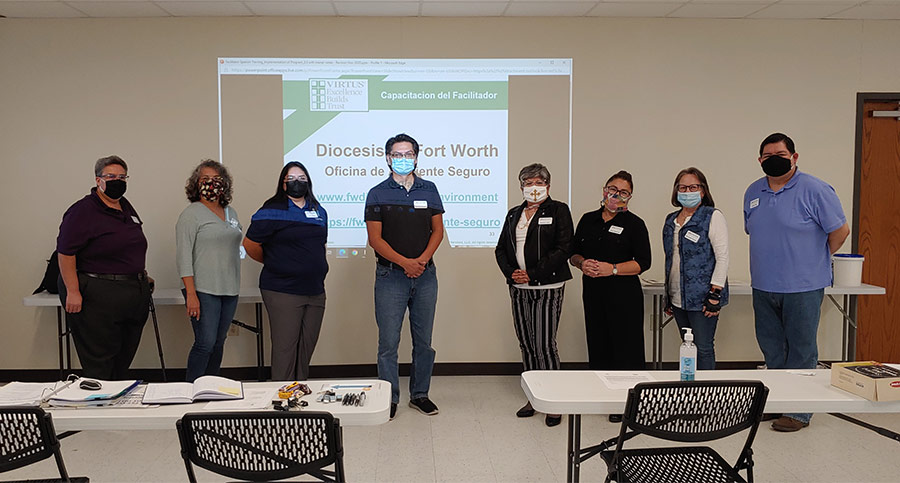 In addition to virtual sessions of Protecting God’s Children, the diocese started offering the 90-minute refresher program, Keeping the Promise Alive, and conducted special presentations on human trafficking and cyber safety for kids and teens.

The primary and follow-up trainings also are offered in person at some locations.

“It also shares success stories on how the information has made a difference, and it goes beyond just the Church,” she said.

Participants can use the knowledge wherever they encounter kids who may be in danger, both to prevent abuse and assist them in getting help. Anyone can take part in the initial training and special presentations, if they register online and create a Virtus account.

Mitchell said, “Our prayer is it encompasses not just those who have regular contact, but everyone who has contact with kids or vulnerable adults, to help them in learning how to keep their eyes and ears open regarding potential abusive behavior.”

With all the changes from COVID-19 in 2020, child sexual abuse is still a big problem because abusers often are in the home with the child, Schrader-Farry said.

Safe Environment continues to reach out to potential victims and promote awareness of the problem. The office and coordinators across the diocese have placed posters in all 91 parishes and 19 schools to help victims. They offer resources like the victims’ assistance hotline and website.

The Safe Environment staff is looking forward to returning to live and in-person sessions soon. “Because of the importance and nature of this topic, we feel it is best presented in person to promote discussion and interaction with participants,” Schrader-Farry said.

Opening the door to dialogue

Rios, the Spanish facilitator, said he’s been impressed by the conversations that the Virtus training has prompted. Because they’ve talked about what to look for in potential abuse and how to address it in training, they can talk to a colleague, “Did that seem okay to you?”

“Before, I didn’t feel like these conversations were taking place,” he said.

In addition to a lot of helpful conversations, the Spanish instruction of facilitators included a new element. At the end of the two days, they played “Pomp and Circumstance” and handed out nameplates and manuals.

That was done at the request of Rios because he wanted the new facilitators to “feel special and know how important they are to the process.”

He said the little ceremony was a hit.

“I couldn’t tell if they were smiling because of the masks, but there was a brightness in their eyes,” he said.