FORT WORTH — A first-grade teacher for most of her career as an educator, Sister Francesca Walterscheid, SSMN, stood barely 5 feet tall but considered her diminutive stature an advantage. The many young children she taught in Texas and California Catholic schools over the years found comfort in her small size.

Sister Rosemary Stanton, SSMN, was one of them.

“There was something very childlike about her,” remembered the former St. Ignatius School student who once sat in Sr. Francesca’s first grade classroom in Fort Worth. “We weren’t afraid of her because she was so tiny and beautiful.”

Many of the veteran teacher’s friends and former students flooded social media with similar memories of the short but spry sister after learning of her death on October 4. The 92-year-old passed away peacefully at Our Lady of Victory convent following a brief illness.

Given the name Sr. Francesca of the Holy Ghost when she entered the SSMN convent in 1946, the Muenster native spent more than two decades as a teacher before shifting her focus to health care in 1978. She was teaching first grade at St. Cecilia’s School in Dallas when Sister St. Mark, SSMN, who supervised the convent’s infirmary, died in a tragic car accident.

“We worked together on weekends, so I knew what was going on,” said Sr. Francesca, recalling the transition in a 2019 interview with the North Texas Catholic. “I missed teaching but kept busy working with the sick.”

Assisting registered nurse Sister Elaine Breen, SSMN, the infirmary aide spent the next several decades caring for sick and elderly sisters at Our Lady of Victory Center. The pair often attended workshops on aging and health care to hone their skills. She also found time to volunteer with handicapped children at Wings of Hope, an equine therapy organization, and Cook Children’s Medical Center where she rocked babies in the neonatal intensive care unit.

Every Monday until 2019, the substitute grandmother cradled premature infants providing them with the physical contact needed for social bonding and growth.

“Sometimes I talk to the mothers who are there. It’s stressful for them but Cook Children’s is a beautiful environment and the hospital nurses are all caring and concerned,” Sr. Francesca once said describing the ministry.

While at Cook Children’s caring for her son after surgery, Allison Klement Rix recalled seeing the dedicated hospital volunteer.

“All of a sudden this older woman just buzzed by me and I realized it was Sr. Francesca,” said the Holy Family parishioner who grew up in Muenster. “She was in her 90s and moving faster than we were.”

The longtime friend was saddened to hear of Sr. Francesca’s sudden death. 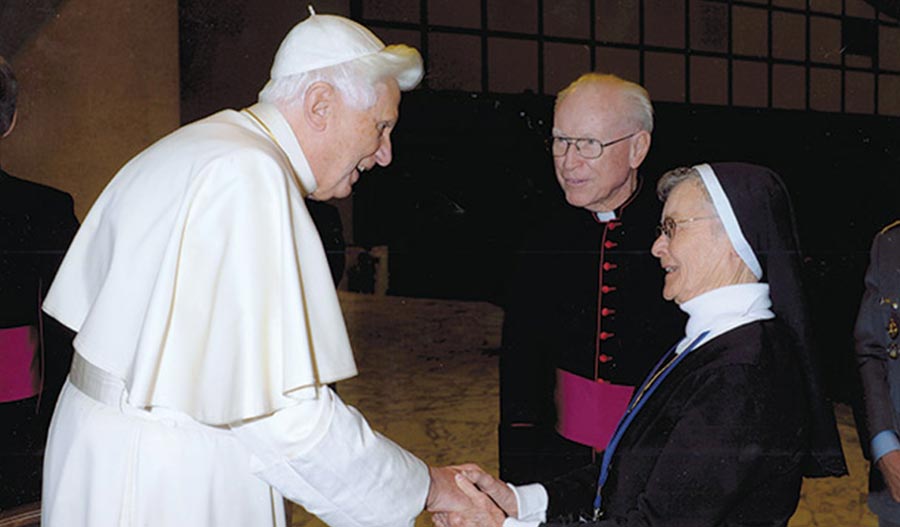 “She was so energetic and kind, it seemed like Sr. Francesca would live forever,” Rix continued. “She would tell me stories about my grandfather. I’m going to miss that.”

One memory the avid storyteller liked to share was her 2009 trip to visit Italy’s shrines with 500 other pilgrims from the Diocese of Fort Worth. While in Rome, Sr. Francesca and the late Monsignor Charles King were chosen to meet Pope Benedict XVI. Proud of her German heritage, she used the opportunity to utter, “we love you,” to the pontiff in his native language.

“He responded, but I don’t know what he said. I was pretty overwhelmed,” she confessed. “I was so honored to meet him.”

“She loved Mother Cabrini,” explained Sr. Rosemary. “I think she went up to Chicago (home of the National Shine of St. Frances Cabrini) to visit the sisters there.”

The former student said her fellow Sister of St. Mary will be remembered for her gifts of charity, kindness, and acceptance of others.

“She’s been a model for me since the first grade,” Sr. Rosemary added quietly. “She was my teacher then and she’s been my teacher until today.”

In lieu of flowers, donations to the Sister of St. Mary of Namur retirement fund are appreciated.