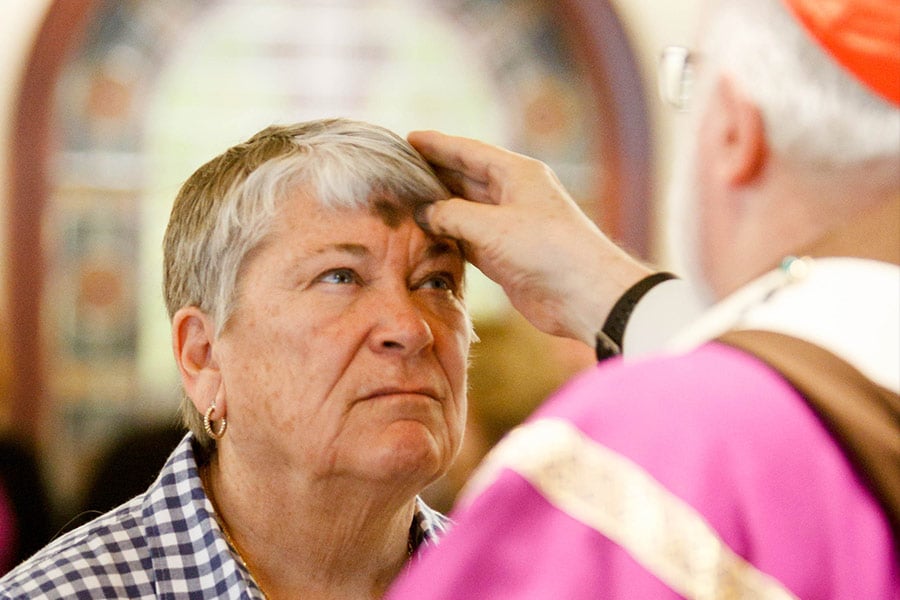 WASHINGTON (CNS) — Many people looking at their February calendars are doing a double-take with Ash Wednesday falling on Feb. 14, Valentine's Day.

The two days, steeped in tradition, don't have too much in common beyond their religious roots. Valentine's Day, named after St. Valentine, a third-century martyr, is all about romance with its emphasis on cards, candy, flowers, and nice dinners, where Ash Wednesday takes a more somber tone as the start of 40 days of prayer, fasting, and almsgiving of Lent.

Ash Wednesday also is one of two days, along with Good Friday, that are obligatory days of fasting and abstinence for Catholic adults — meaning no eating meat and eating only one full meal and two smaller meals. In other words, not a day for consuming candy hearts, chocolate cakes or fancy steak dinners.

And for those who wonder if Catholic bishops might grant a dispensation from the day's fasting requirements, as they sometimes have with the no meat rule when St. Patrick's Day falls on a Friday in Lent, they should probably think again.

Bishop Robert J. Baker of Birmingham, Alabama, told Catholics in his diocese in a Jan. 29 statement that "some have wondered whether a dispensation for the standard laws of fast and abstinence would be granted" Feb. 14.

"A dispensation will not be given," he wrote, stressing that this decision was "out of respect for the importance of Ash Wednesday in the lives of so many — including our non-Catholic brethren — and the way this custom underlines the importance of the Lenten season at its outset."

He suggested Catholics celebrate Valentine's Day on another "non-penitential day," maybe even Feb. 13 — which is Mardi Gras.

"The good Lord, who suffered so much out of love for us, will surely reward our fidelity and sacrifice," he added.

A Jan. 26 statement by the Archdiocese of Chicago similarly suggested celebrating Valentine's Day on Mardi Gras: "a traditionally festive time before beginning our Lenten observance."

"Catholics throughout the world recognize Ash Wednesday as the solemn beginning of a period of prayerful reflection and penance, as is evident by the large number of churchgoers on this day," the statement said, stressing that the day's "obligation of fast and abstinence must naturally be the priority in the Catholic community."

Joseph Zwilling, communications director for the Archdiocese of New York, told Catholic News Service that New York Cardinal Timothy M. Dolan did not given any dispensation for Catholics for Valentine's Day and pointed out that St. Patrick is the patron saint of the archdiocese, which puts the celebration of that day "into a different category."

Similarly, the Archdiocese of Detroit was not giving a pass. Ned McGrath, archdiocesan director of communications, told the Detroit Free Press: "I have no reason to doubt the ability of my fellow Catholics to multi-task, honoring their commitment to the church's liturgical calendar and, if they so choose, to observe Valentine's Day and April Fools' Day," (which coincidentally falls on Easter this year).

He also noted that the last time Ash Wednesday and Valentine's Day overlapped, in 1945, the Detroit Tigers won the World Series.

Researchers at the Center for Applied Research in the Apostolate, or CARA, based at Georgetown University, point out that the two days will overlap again in 2024 and 2029 and that in 2096, Ash Wednesday will occur on Leap Day — Feb.29 for the first time in the Church's history.

Despite the rarity of this year's Ash Wednesday date, an article on the CARA website notes that it is unlikely the U.S. bishops would give an Ash Wednesday dispensation as some of them have on St. Patrick's Day mainly because not much is known about St. Valentine. It points out that he is said to have been killed at the command of Emperor Claudius in the year 278 for marrying Christians at a time when the emperor was trying to recruit single men for the army.

Not only are there few details of the saint, there are also mixed accounts of possibly three different martyrs named Valentine that share a Feb. 14 feast day. The confusion and lack of details led the church to remove the liturgical feast of St. Valentine from the general church calendar in the late 1960s.

Instead, Sts. Cyril and Methodius, brothers known as the "Apostles of the Slavs" for their work in spreading the Gospel throughout Eastern Europe in the ninth century, have the Feb. 14 feast day spot on the church calendar, although this year their day is superseded by Ash Wednesday.

These brothers — who developed an alphabet and translated the bible and other works in a Slavic language — have just as much to say about love on a day when that is celebrated because of their emphasis on communication, which is so key to relationships, said Father Leo Patalinghug, who has a cooking show on the Eternal Word Television Network called "Savoring our Faith."

The priest, who knows a thing or two about making a good Lenten meal, and also writes and talks about couples keeping their relationships strong by celebrating with good meals once a month, sees no conflict in the Ash Wednesday, Valentine's Day overlap. Instead, he views it as a great teaching moment.

In between cooking segments Jan. 31 for his television program, the Baltimore priest who is part of a community of consecrated life called Voluntas Dei, told CNS that the overlap was a "special providence of God" because it can offer a deeper sense of what love really means — which at times requires sacrifice.

"Love is not just sweets and chocolates," said the priest who wrote the 2012 cookbook: "Spicing Up Married Life" which includes recipes, prayers, and conversation topics. "You can have chocolate cake anytime," he added.

As he sees it, the bigger lesson is to think about "going without and where that will lead you."

"So often people treat love like fast food when love — and all things of God — take time," he added.

He said this Valentine's Day couples have the "perfect day to start Lent and to have that discussion of what love means." And, they can also have a modest meal that is delicious.

Overall, it's "absolutely a win-win," he noted because couples can have a "Lent appropriate menu" essentially infused with the day's reminder "to know humbly we are from dust."