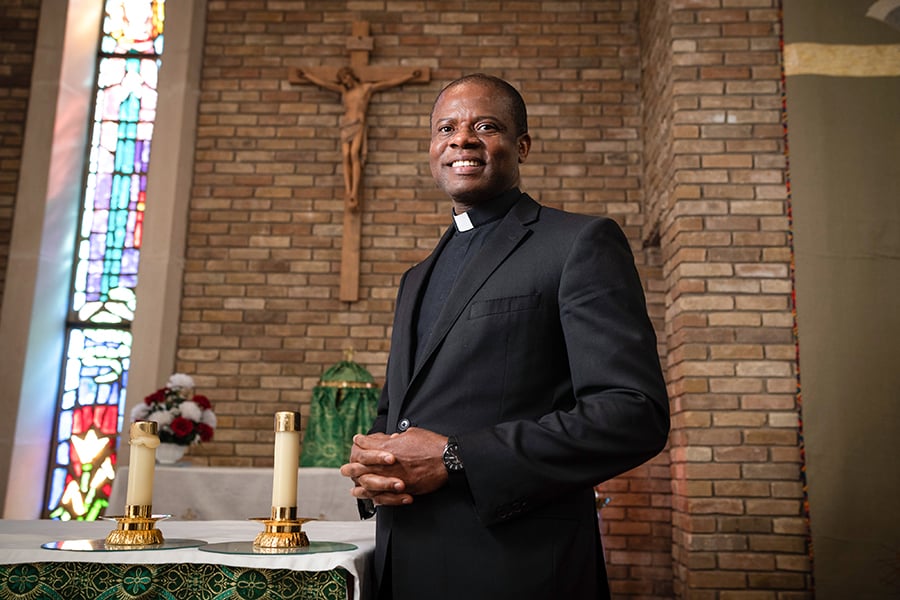 Jim Burkett knew he would like Father Eugene Nyong from their first encounter.

A longtime sacristan at St. Mary Parish in Graham, Burkett was accustomed to preparing the altar for the celebration of Mass according to the preferences of each priest. So when Fr. Nyong arrived, Burkett introduced himself and asked, “How would you like the altar set up for Mass?”

Fr. Nyong reached behind him and pulled out the General Instruction of the Roman Missal. “This is how we do Mass. We will do it right,” said the priest.

“And that makes my life easier,” laughed Burkett.

On September 14, the pastor of St. Mary Parish and St. Theresa Parish in Olney will observe the silver anniversary of his priesthood, nearly 7,000 miles from where he was ordained in the Diocese of Uyo, Nigeria.

In those 25 years, he has celebrated Mass in English, Spanish, French, Ngambaye, and his mother tongue of Ibibio, but he has always celebrated it attentively, reverently, and correctly.

He explained, “The liturgy is not my liturgy. It’s the Church that’s given me the faculty to celebrate it, and it’s a public celebration — not something where I can introduce whatever I feel like. The people have the right to a proper celebration of the liturgy, so I have to respect their right.”

In addition to adhering to liturgical norms, his parishioners can rely on receiving a well-considered homily. Fr. Nyong puts a lot of time and study into each homily, because “people have the need; people have the right to be fed with the Word of God. [I] should be prepared to give them the nourishment.

“I put a lot of work into it,” he described. “What is the key to open [the Scripture] and get the message?” And once he finds the key, the rest of his homily comes easily.

Vickie Keller, the volunteer director of religious education at St. Mary Parish, appreciates Fr. Nyong’s “awesome homilies. He hits the point. You can tell he has a strong faith — we are blessed to have him.”

The blessing of his presence might seem a little unlikely. Fr. Nyong’s 25 years of priesthood have taken him farther than most diocesan priests.

Shortly after ordination, his bishop assigned him to missionary work in Chad, where he had to learn French and the local language of Ngambaye in short order. The country was in the midst of civil unrest, and rebels kidnapped and tortured a priest at the cathedral where Fr. Nyong was based. Another priest was driving his truck when rebels commandeered it. Fr. Nyong’s personal safety was often at risk, and he admitted it was a difficult assignment.

He returned to his diocese after four years, where he encountered violence personally. During a robbery of the rectory, he was shot in the head and back. Although a bullet passed close to his spinal cord, he was not permanently injured.

After several years in his diocese, his bishop sent him to Texas, where he served at St. Mary Cathedral in downtown Austin. Then on to the Diocese of Fort Worth, where his first assignment was parochial vicar of St. Francis of Assisi Parish in Grapevine. While there, he traveled to many parishes in the diocese to celebrate Mass.

Fr. Nyong is the third of seven children “in a praying family. My mom and my dad would not go out for anything, or sleep, without calling all of us to pray as a family.”

He attended local Catholic schools, and he and his four brothers were altar servers. At home, he would sometimes dress as a priest and mimic the Mass.

Growing up, he was open to the idea of a religious vocation, but he thought he might become a physician. When he entered minor seminary as a high school student to discern the priesthood, he asked God to make his vocation obvious — physician or priest. His biology grade wasn’t high enough to study medicine, which he took as an answer to prayer.

Being a priest, according to Fr. Nyong, “is service. It’s a call. No one has a right to it.

“That spirit of service is important to me. Getting people to know God, accept Him, being baptized — that brings me joy,” said the priest.

He especially likes to get young people involved and rooted in the Church by encouraging them to become altar servers after they receive their first holy Communion and lectors after they are confirmed.

“I like to inspire them. It’s not the church of Mom, the church of Dad — but they have a place in the Church, and there are various ministries that they can carry out,” he said.

Olivia Olvera, director of youth and family ministry for the parishes, said Fr. Nyong frequently drops by religious education or youth group meetings “so they see him; they know he’s available and paying attention to them. He’s a very good pastor.”

He wants all the parishioners, regardless of age, to realize “God loves each and every one of us, with the knowledge we are sinners, and He still loves us. If only we agree, accept, cooperate with His grace, we remain God’s beloved people.

“Faith is not just something you profess. You have to live it. You can’t disconnect your life from your faith,” he continued, adding that God is the only source of truth.

Reflecting on his years since he answered his vocational call, Fr. Nyong recalled the privilege of assisting in the weddings of his six siblings.

He cited many forefathers from the Bible, such as Jonah, Moses, and Isaiah, who were reluctant to answer God’s call. “God doesn’t take ‘no’ for an answer, but He transforms those He calls.

“That’s what I’ve learned in 25 years, that God transforms those He calls, if you are willing to cooperate with His grace, because He also respects our freedom to say ‘yes’ or ‘no.’”

The parishes of St. Mary and St. Theresa will celebrate Fr. Nyong’s “yes” with a Mass and dinner on September 24, marking Fr. Nyong’s silver anniversary as a priest and St. Mary’s centennial as a parish.