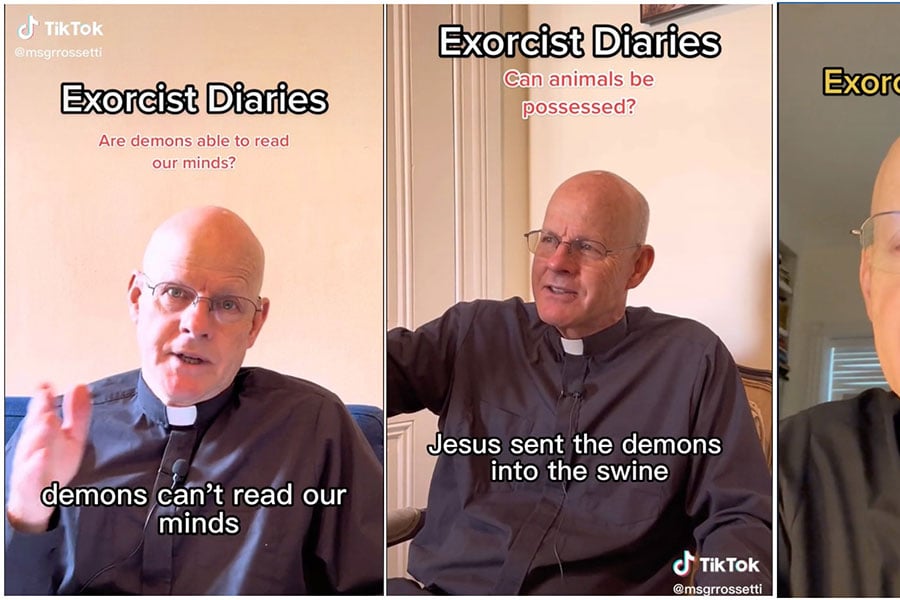 Monsignor Stephen Rossetti, a 71-year-old Catholic priest, started a TikTok channel last month when it came to his attention that the popular social media platform was introducing kids to something other than harmless videos of lip-syncing, viral dance challenges, and funny things caught on home security cameras.

As the chief exorcist of the Archdiocese of Washington, Rossetti was concerned when he learned that videos with hashtags like “WitchTok” and “Folk Catholicism” had become popular on the TikTok app.

Stephen Rossetti has gained thousands of followers on social media after sharing the wisdom he has gained as an exorcist on online platforms. Monsignor Stephen RossettiIf you scroll through the platform using those hashtags, you’ll come across a variety of eyebrow-raising videos claiming to share magic spells and manifestations associated with witchcraft. Most TikTok users across the world are between the ages of 18 and 24, according to data compiled by Statista.

“A lot of the young people are not churched, they don’t go to church, they’re uncatechized, and so they’re wandering into dangerous territory,” Rossetti told CNA in an interview Wednesday.

Rossetti then began sharing the truths of the Catholic faith through the eyes of an exorcist on social media in September, on TikTok from @msgrrossetti and on Instagram and Facebook.

“Demons can’t read our minds, they can’t see the future. But they intellectually are very bright. I mean they are stupid because they have no wisdom,” Rossetti explains in one video. “They are like a super-computer. They can see what’s going on and they can guess what you are thinking, very accurately.”

“Demons don’t look like anything because they’re pure spiritual beings. They have no bodies,” Rossetti said in another video.  “Just like when angels have wings. I mean they really don’t have wings,” he said in the video. “They don’t have bodies.”

Rossetti has been pleased with how well his videos are performing on TikTok.

“We just started on a trial basis and asked ourselves if we were getting a response on both platforms,” he told CNA.

“And the answer is yes. It’s huge,” Rossetti said. “So, clearly we found that the young people are interested in these kinds of things and it gives us a chance to touch that group and to evangelize them.”

Rossetti doesn’t create the videos himself. He considers himself “a bit of a dinosaur” in the social media realm. But the nonprofit he runs, St. Michael Center for Spiritual Renewal, has employed a social media consultant to edit the videos on both platforms.

Rossetti’s organization specializes in praying for deliverance and healing for those who experience spiritual suffering. Once a month the organization holds an online deliverance session where people from across the globe tune in live to be prayed over, Rossetti said. This month, over 12,500 people have joined, he said. Those interested can sign up on the organization’s website.

Rossetti told CNA that he has seen these live deliverance prayers have a positive effect on those looking for healing. His website includes testimony  from those who took part in the sessions. He also said that it can be beneficial to watch a recorded deliverance session online.

“It all depends on what God wants,” he said. “The Lord decides, but our experience so far has been that people do seem to benefit from recorded videos of these deliverance sessions.”

Rossetti, who is also a research associate professor of practice at The Catholic University of America in Washington, D.C., said that there is “no question” that videos are more clickable if words like “satan” or “demon” are in the title.

“You get their attention and if you actually listen to the videos, you’ll see that in the end the Lord triumphs and that Jesus casts out Satan,” he said.