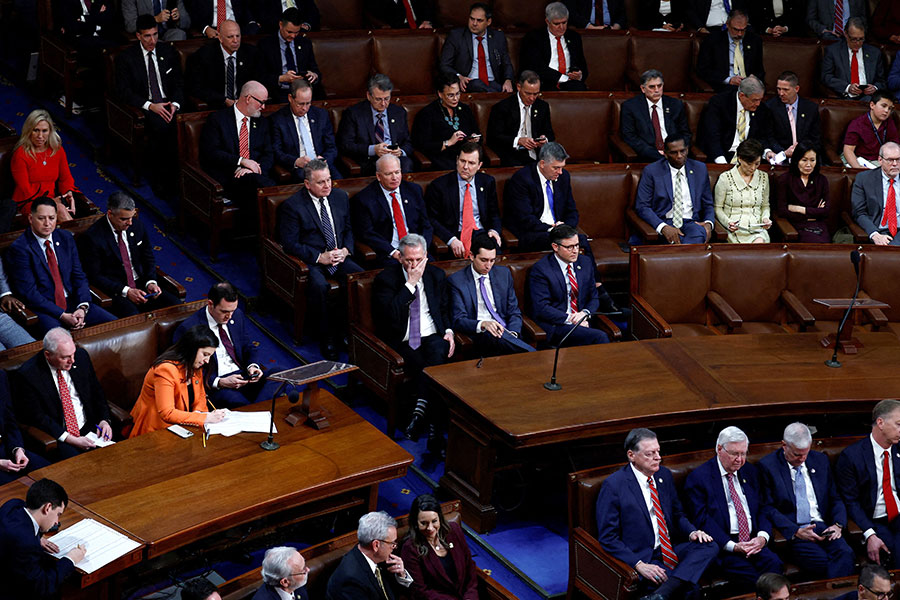 The second day of the 118th Congress at the U.S. Capitol in Washington Jan, 4, 2023. (OSV Photo/Evelyn Hockstein. Reuters)

WASHINGTON (OSV News) — The U.S. House of Representatives Jan. 11 passed two pro-life measures, however neither has a clear path through the U.S. Senate to become law.

The Born-Alive Abortion Survivors Protection Act passed first in a 220-210 vote, with one member, Rep. Vicente Gonzalez, D-Texas, voting present, and with Rep. Henry Cuellar, D-Texas, joining Republicans to support the bill. According to proponents, the bill would require any infant that survives an abortion procedure to receive appropriate medical care for their gestational age.

“We commend the House of Representatives for passing legislation to protect innocent children from infanticide, and urge the Senate to follow suit,” said Bishop Michael F. Burbidge of Arlington, chairman of the U.S. Conference of Catholic Bishops’ Committee for Pro-Life Activities. “Babies who are born alive during the process of an abortion deserve compassionate care and medical attention — just the same as any other newborn baby.”

Bishop Michael Olson of the Diocese of Fort Worth, along with the U.S Conference of Catholic Bishops, supports Bishop Burbidge’s statement.

On Tuesday, Bishop Burbidge sent a letter to members of the House urging them to vote for the bill.

A second measure, a resolution condemning violence against “pro-life facilities, groups, and even churches,” also passed in a 222-209 vote. This resolution condemned the violence that erupted following the U.S. Supreme Court’s June 2022 decision in Dobbs v. Jackson Women’s Health Organization which overturned prior precedents that found a constitutional right to abortion.

Neither measure is likely to be considered by the Senate, which remains under Democratic control.

The measures come in the first week of legislative business for the new Republican majority in the House after spending their first week in power electing a House speaker, Rep. Kevin McCarthy, R-Calif.

The votes took place as some Republican leaders, including former President Donald Trump, have blamed the issue of abortion as being responsible for the GOP’s lackluster performance in November’s midterm elections.

However, the House saw Republicans publicly restate their commitment to advancing pro-life policies.

Rep. Ann Wagner, R-Mo., who sponsored the reintroduction of the Born-Alive bill, said in a statement the legislation would “provide commonsense protections for innocent children and their mothers and will ensure all babies receive the essential care they need at an incredibly vulnerable moment.”

“All children should have the right to receive life-saving care, especially those who survive an abortion,” she said.

Infants who survive botched abortions are rare, but Melissa Ohden, founder and CEO of the Abortion Survivors Network, said in a statement that tens of thousands of abortion survivors like her do exist.

“We applaud Congresswoman Wagner’s leadership in ensuring infants like me, and countless others, are guaranteed medical care and legal protections when abortions fail and life wins,” she said.

Other leading pro-life organizations praised the House for passing these measures.

Marjorie Dannenfelser, president of Susan B. Anthony Pro-Life America, said in a statement, that the GOP leadership recognized the federal government’s “crucial role in protecting our most vulnerable children and their mothers in the Dobbs era,” and both initiatives “affirm the sanctity of life.”

“Our government’s most sacred duty is to safeguard the lives of all Americans,” she said.

Bishop Burbidge’s letter regarding the “Born Alive” Bill and other resources may be found at: https://www.usccb.org/about/pro-life-activities/born-alive-bill.cfm