Weather the storm - local Catholics reach out to help their neighbors 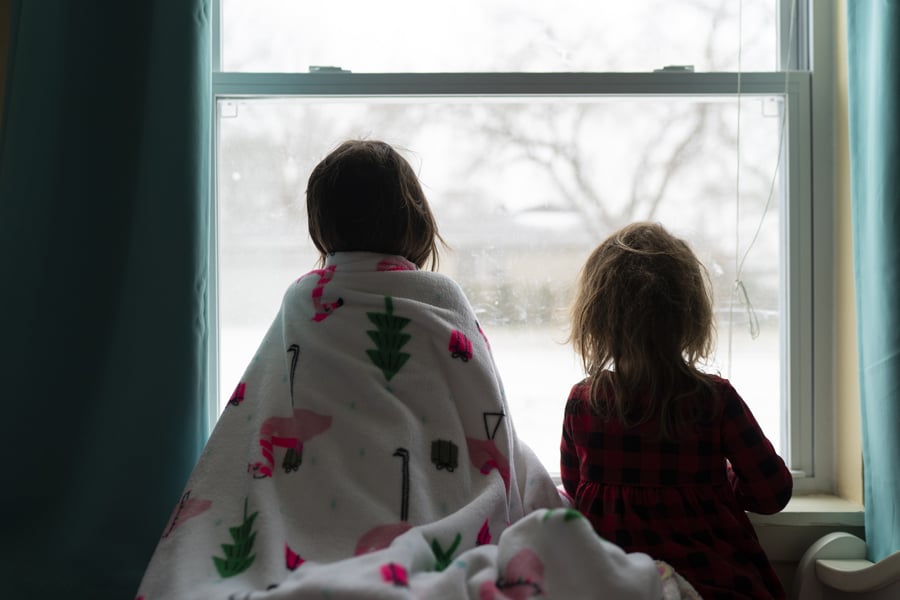 From a chilly house without electricity, two girls look at the winterscape in west Fort Worth. (NTC/Juan Guajardo)

Years from now, when people think back on the frigid blast of winter that swept across Texas in 2021, many will remember the discomfort of sitting in a dark, chilly home waiting for the lights and heat to come on. Millions were left without electricity for days after historic, sub-freezing temperatures crippled the state’s power grid.

“It got down to 40 degrees,” said Janet Fick, whose Saginaw home went without power for 55 hours.

The St. George parishioner and her husband, Duane, were reluctant to burn wood in the fireplace because it hadn’t been used in 30 years.

“We burned candles for a little heat,” added Fick, who checked on neighbors with text messages. “And I’d sit in my truck to get warm while charging my phone.”

For many, frozen pipes, cracked wells, and offline treatment plants created other issues — a shortage of drinkable water and damage to homes and property caused by pipes bursting.

God was looking out for me

Tim Mills was already stuck in a 15 to 20-car pile-up on Interstate 35W when he saw another tractor-trailer rounding an ice-slicked hill and headed his way. Bracing for another impact, the St. Rita parishioner only had time to utter one brief prayer,

“He jackknifed and landed between the walls [of the road] about 30 yards behind us when it finally stopped,” said Mills, who was part of the first section of vehicles involved in the chain reaction crash.

The truck’s position served as a blockade, “and probably saved all of their lives,” added his wife, Diane.

Sitting in his four-door pickup, Mills could hear the collisions behind him.

Six people lost their lives and dozens more were injured in the February 11 accident that involved 133 vehicles along a mile of the North Tarrant Express Lanes near 28th Street in Fort Worth. Freezing rain coating the pavement played a part in the massive pile-up. Mills, who survived a 1988 head-on car crash that kept him hospitalized two months, suffered only soft tissue injuries.

“He told me he was in a wreck and to turn on the TV,” Diane said, recalling the scene of twisted sedans, pickups, and 18-wheelers. “There was no getting to him.”

Diane, a long-time volunteer who once directed the youth choir at St. Ann Parish in Burleson and served on the school boards of Our Lady of Victory, Cassata, and Nolan Catholic, immediately called family and friends to ask for prayer. Those people contacted other prayer chains.

“We were immediately surrounded by prayer and you could feel it,” Diane continued. “God saved Tim because He knew how much he’s needed. I’m the one who goes out and does things, but he’s quietly in the background taking care of people.”

The grandfather of two checks in on his 86-year-old wheelchair-bound mother twice a day and helps his disabled brother. Neighbors also rely on him.

“I can’t explain it except to say the good Lord was looking after me,” he said thoughtfully. “I know my faith is stronger now than when I went over that icy hill.”

When staff members at Good Shepherd Parish in Colleyville saw water flooding the parish hall, meeting rooms, and a few offices in the administration building on Feb. 16, they issued an SOS requesting volunteers. More than a hundred people showed up the next morning with wet/dry vacuums.

“And we got a lot of the water cleaned up in an hour and a half,” explained business manager Michael Vinez. “There are still a lot of unknowns. We know at least one pipe needs to be fixed.”

To protect against undetected leaks, employees did not turn on the church boilers so that weekend Masses could be held.

Vinez wasn’t surprised so many people offered to help when they may have their own weather issues at home.

“I’ve been at the church a long time and our parishioners are just amazing,” she said. “We ask and they give us whatever we need.”

When Cassie and Rafael Zelaya found out their next-door neighbors had no electric power or water because of frozen pipes, they welcomed the couple and their two puppies into their home without hesitation.

“Our generator is hardwired into the house so anytime we lose 30 percent of power, it kicks in,” Cassie explained. “It runs off natural gas, maintains itself, and has saved us so many times.” The Holy Redeemer parishioners also opened their home to other friends needing a shower or clean clothes during the weather crisis. Home-cooked meals, prepared by their neighbor, added to the camaraderie.

“We are extremely blessed. My husband works in the oil and gas industry and as long as it stays good, we try to bless as many people as we can,” she continued.

The freezing temperatures blanketing the state were “a crazy disaster no one expected” but it showcased the kindness and generosity of people living in the Lone Star State.

“It’s Texans helping other Texans,” Cassie said. “You open your door to the needs of others. Everyone I’ve talked to who doesn’t have something is staying with someone who does.”

Many homeless congregate in Marine Park across from the church in the North Side of Fort Worth. Many neighbors were affected by the power outage.

“The pastor opened a warming station in the parish hall for people who needed to get out of the cold,” Deacon Ricardo DeLeon explained. “We called for volunteers and it quickly came together.”

Eager to offer water, coffee, snacks, and blankets to anyone coming through the door, the deacon waited in the room for three hours. No one came.

“A police officer stopped in just to see how things were going and he mentioned an effort to pick up the homeless in the area and take them to the Convention Center,” DeLeon reported. “That may be why we didn’t get anyone.”

Letting the community know about the warming station on short notice is another reason for the lack of response.

Organizers used social networking for publicity but internet service was unavailable for many during the blackout.

“We did get a call late Tuesday to see if we could open as an all-night shelter, but we didn’t have the mattresses, cots, and manpower to do that,” the deacon admitted.

Opening a warming station during the weather crisis was a good idea, and DeLeon said the parish hopes to build on that initiative. Summer heat waves may require cooling stations.

“We want to anticipate events like this so we can better serve the community,” he added. “Fr. Manuel wants to start more outreach services like a St. Vincent de Paul Society so we can address people’s needs.”